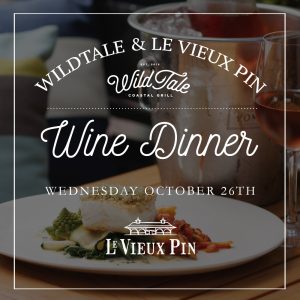 Join us for a rare opportunity to taste some of the outstanding wines produced by our friends at Le Vieux Pin Winery paired with menu creations by WildTale Executive Chef, Andrew Smith. 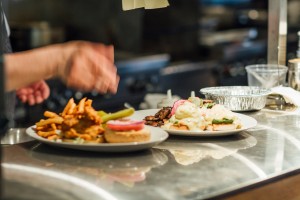 A couple of years ago, when the idea for WildTale was just beginning to take form, we noticed that for a city so perfectly situated on the ocean’s edge, there weren’t as many great seafood restaurants as one might expect. We set out to help change that and it seems that others had a similar epiphany.

We are very proud and happy that Forbes Travel Guide would choose to include us in its review of all things “seafood and views”. 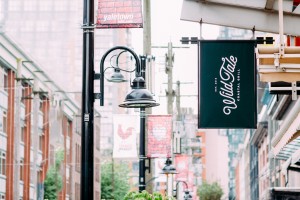 Wild Tale Coastal Grill is a casual West Coast seafood spot with a killer patio on Mainland Street and a fantastic daily happy hour from 4 to 6 p.m., offering dishes such as lobster poutine and halibut poppers. The menu pays homage to seafood from around the country with PEI mussels and Nova Scotia scallops featuring alongside Lois Lake steelhead and Haida Gwaii sablefish. Daily specials like halibut and hand-cut fries or West Coast seafood paella hover around the $12 mark offering excellent value for money, making it a perfect pick for the end of the month.

Don’t miss: The Sunday night Maritimes-style lobster suppers with five set courses and a one-pound lobster of your very own for just $50.

Click here for full article and all featured restaurants. 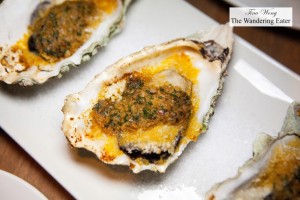 Wild Tale is a fairly new seafood restaurant founded by co-owners John Crook and Erik Heck. In recent years, they’ve made a name with their crowd-pleasing Flying Pig restaurants. The whole concept of this place is California-fresh, easily affordable, simple seafood restaurant.

The dining room is spacious with some wood trim to make it feel rustic and squeezed in a few more tables on the bare-bones patio. The color scheme is beige, cream and hunter green. Sort of feels like a fishing lodge.

There is nothing revelatory about the menu – and that’s a good thing. It’s comfort seafood, done well for the most part. The vast majority of the seafood is Ocean Wise-friendly. Fortunately for the locals, the daily catch isn’t limited to the Pacific Northwest. 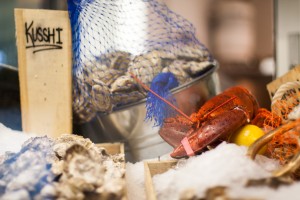 Carolyn Heller of Forbes Travel Guide has some nice things to say about recently open Vancouver restaurants, including our own WildTale.

“Vancouver had a banner 2015 for restaurant openings as fresh places to eat and drink cropped up all across the city. We’ve got the scoop on the best of these newcomers to put on your Vancouver itinerary for plenty of great eating in 2016.”

WildTale
For a region focused on the sea, Vancouver has surprisingly few straightforward seafood restaurants where you can get great grilled fish with interesting accompaniments. Enter WildTale, a stylish seafooder in Yaletown. Begin your experience with a glass of B.C. wine and something from the raw bar, whether it’s fresh oysters (East Coast, West Coast or fried) or Hawaiian-style ahi tuna poke with avocado and jalapeño. Then see what’s on the fresh-catch menu of simply grilled fish — just the thing for a memorable Pacific Northwest culinary voyage.

To read the entirety of her article, please click here.

10 Awesome Vancouver Dishes to Make You Ditch That Detox

Here is more of what she had to say about ours and nine other local offerings that will have you rethinking any detox. 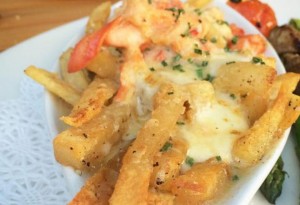 “How much does inner peace cost? Well, at WildTale, $6 at happy hour or $9 (as a special request) at dinner. Small coin indeed to satisfy your soul with a bowl of the Food of the Gods: lobster poutine. Fat chunks of juicy lobster swim happily with crisp Yukon Gold fries in a  rich buttery lobster gravy, and generously anointed with cheese curds and Grano Padano cheese. A single bowl has the power to turn around even the ugliest day.”

Check out her full article here

Vancouver dining trends in 2015: The good, the bad and the annoying

The Globe and Mail 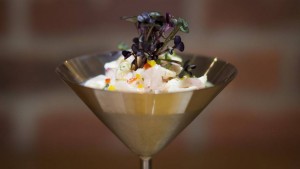 A Homage to the Maritimes 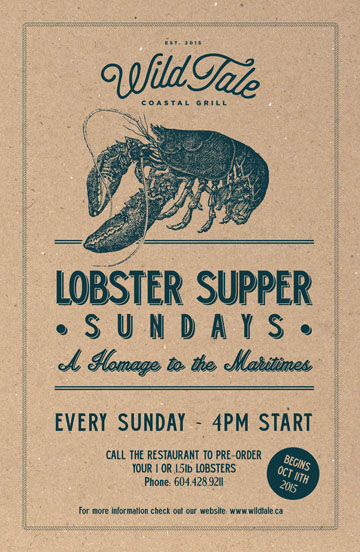 We’re excited to be able to offer our guests a snapshot of the Maritimes right in the heart of Vancouver.  Lobster Suppers are longstanding community traditions in the Maritimes and draw people from far and wide for amazing seafood, great conversation and socializing in a comfortable and casual setting.

Sounds like a perfect thing for Wildtale to celebrate. There will be paper on the table and lobster bibs so don’t worry about making a little mess. Even if you’re not a pro at eating a lobster, we’d be happy to give you some pointers.

This is something very special and close to our hearts and we can’t wait to share the experience with you.

Dinner starts at 4pm – we look forward to seeing you there.

The impresarios behind the Flying Pig turn their attention to seafood—lots of it. 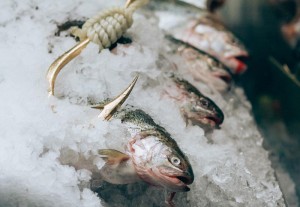 A poetic circularity brings colleagues John Crook and Erik Heck back to the Yaletown address that houses WildTale. The two chefs/entrepreneurs used to work in its kitchen when it was the original Glowbal Grill, gradually hatching the plan for their own casual restaurant, the Flying Pig. The remarkable success of that venture (three bustling locations and growing) allowed them to procure the space from Emad Yacoub, founder of the Glowbal empire, and in short order they transformed it into this welcoming temple of seafood. 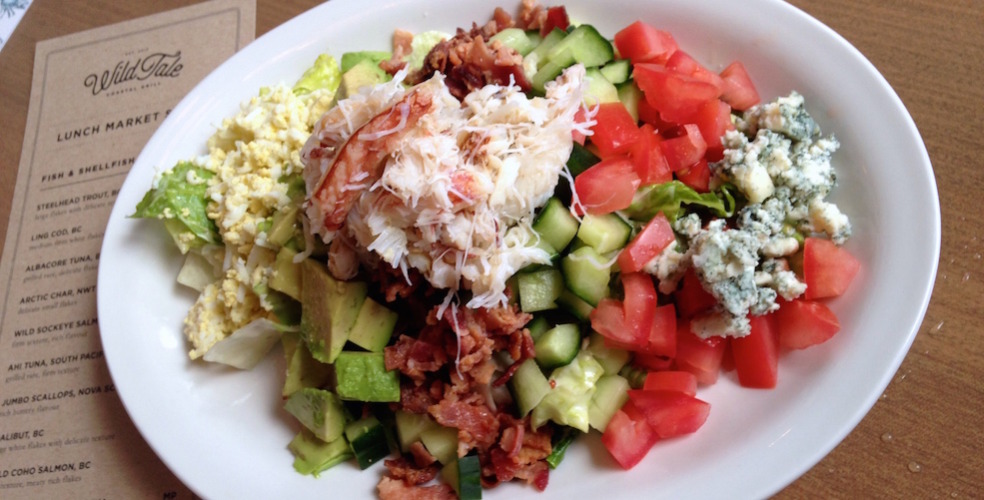 If you’re lucky enough to talk with restaurateur John Crook, you can sit right back and hear the tale of how his latest endeavour, WildTale, got its start.

Crook, along with fellow chef and business partner Erik Heck, operates Vancouver’s beloved Flying Pig restaurants, and while his culinary life has taken him on many journeys within the city and abroad, the idea for WildTale began exactly in the Yaletown space it currently occupies.

In its most recent past, the space at 1079 Mainland was the Glowbal Grill, a lynchpin in what became a local dining mini-empire. It was also where Crook took his first chef job, and under the mentorship of Glowbal’s Emad Yacoub, was inspired to embrace the industry and push himself to learn all the facets of restaurant operations.