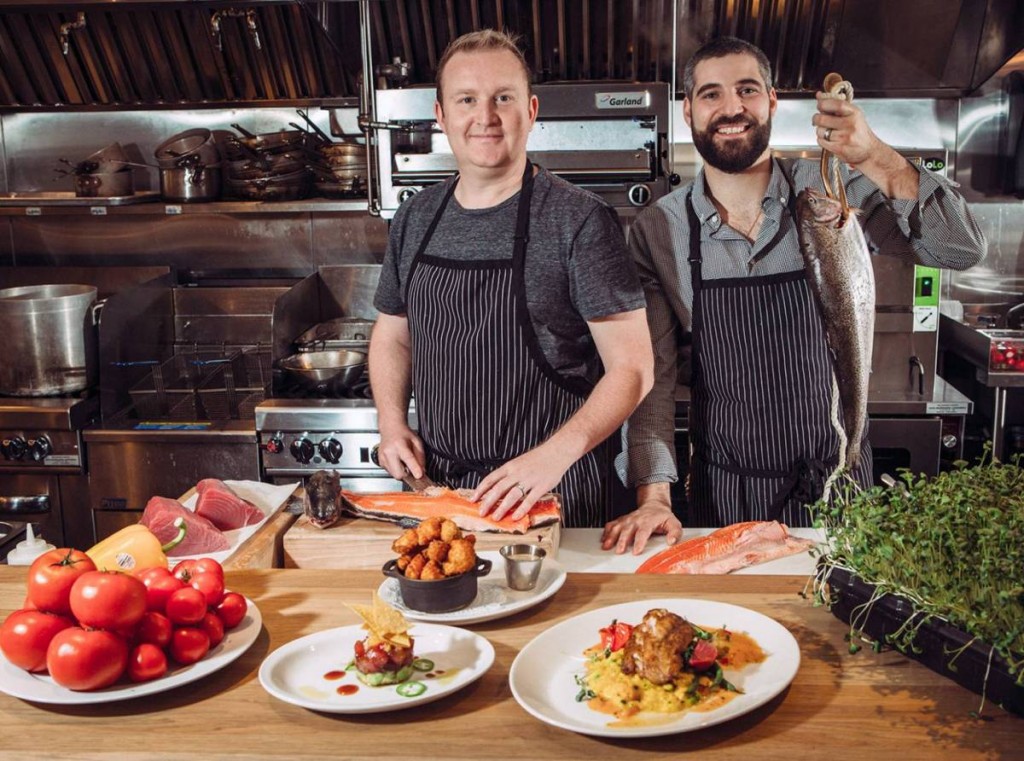 A love of all things local has been one of the greatest trends to take root in the city’s restaurant industry over the last decade—but a new spot in Yaletown is doing things a little differently. While showcasing the best that B.C. has to offer, WildTale celebrates the coastal culinary scene as a whole, serving up everything from Alaskan king crab legs to Prince Edward Island mussels to Nova Scotia scallops to arctic char from the Northwest Territories. It all makes for the kind of seafood feast your Prairie relatives would kill for.

In the former home of Glowbal Grill and Satay Bar, WildTale is brought to you by John Crook and Erik Heck, the duo behind the Flying Pig. Both used to work at Glowbal Grill and held many other positions in kitchens in Vancouver and elsewhere before opening their first venture’s three locations. While the Flying Pig has something for everyone, WildTale focuses almost exclusively on the stuff of the sea.

Old Man and the Sea

Our adaptation of a Classic

There was once… Many years ago, an old man who sailed out to sea. The sky was still dark, it was not yet dawn. Small waves lapped at the side of the old man’s boat as he rowed steadily away from the beach. Hidden in the inky depths below were oysters, clams, shrimp and octopus. Small fish darted like silver birds among the sea anemones and coral fans. The old man rowed into deeper waters, beyond the shelf, where marlin, bluefin tuna and sharks circled deep down in the blue depths. As the late afternoon sun began its descent to the horizon, the old man felt something bite on his lure. He couldn’t see the fish circling far below, but from the angle of the line in the water and the immense force pulling on it, it had to be a monster of a fish.

The old man let out more and more line, letting the fish run deeper. For two nights and two days he let the fish run, pulling the little boat farther and farther away from shore. The old man had a little water to drink and only a few sardines and some tuna to keep his strength. He had hardly slept since leaving port. There were cuts on his hands, his back was sore and his mind weary. On the third day, the fish surfaced, making a final leap out of the waves. It’s massive head and body emerged a few feet from the boat. The old man threw his harpoon with all his remaining strength. The giant dove back into the water in a final desperate dive, and when it returned to the surface, it floated with the white of its belly up. The fish was so big – longer than the boat – that the old man had to tie it along the stern and tow it behind the boat for the journey home. The old man and his fish were far from land now, and there were many hungry sharks before they’d see the lights from the harbour again.

For two more days and nights, the old man barely slept, beating back sharks as dark fins closed in around his prize. He lost his harpoon, his club, his knife, and half his tiller fighting in vain against the noses, jaws and teeth of the ever-present sharks. By the time he saw the faint glow of the harbour in the distance, there was almost nothing left of his prized fish, just the head and a ghostly skeleton. Following the lights back to the beach, he approached the harbour a few hours before dawn. The old man wanted nothing more than to lie down exhausted on his bed and slip into dreams. He dragged the little boat part way up onto the beach. It was all he could do to carry the mast up the hill to his shack.

Everyone in the town was still fast asleep. The old man stopped halfway up the hill, resting wearily on the mast and sail he was carrying. He looked down at the dark harbour below where he could just make out the ghostly spine of the giant fish, swaying in the tide behind his boat. ‘I wish I’d never caught you,’ he said aloud, ‘If I’d never gone out so far, we’d have never met, fish. You beat me,’ He stopped for a minute, frowning into the grey light above the sea. Then the old man smiled. ‘No, he didn’t beat me. I went out too far.’ He continued up the hill, hefting the mast over his shoulder with the last bit of strength. Once inside the small cottage, he lay down on his bed and fell into a deep sleep.